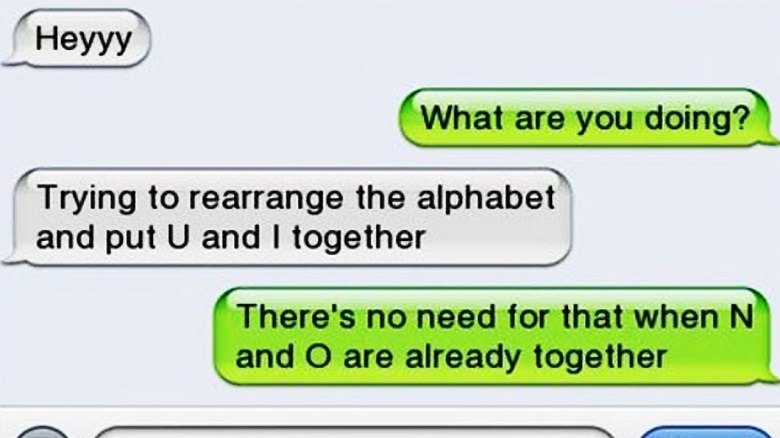 Decoding communication is easy when you’re doing it in front of someone. Not only do you have their words, but you can decipher their meaning from the tone in their voice and their body language.

But when it comes to communicating via text, we have only our words (OK, and some emojis).

Since our brains are used to utilizing words, tone and body language to decipher someone’s meaning, texting forces us to make up the difference.

We tend to make up the difference by imagining the tone and the body language of the sender, and that can lead to trouble, especially when it comes to talking to our crush.

So to add to our toolkit, here’s a handy zodiac guide to how each sign in the astrological chart communicates via text message. It’s not an exact science or anything, but hey, we can use all the help we can get.

Aries are known for being enthusiastic, so don’t be surprised if they use exclamation points like an 8-year-old in a candy store. That’s IF they text you back.

They’re not great at responding right away because they’re probably busy doing more fun things. Even though texting is the fastest form of communication, Aries will be the first to roll their eyes and say it “takes too long.”

Taurus– Direct and to the point.

A Taurus might come off as cold or uncaring in a text message, which opposes how charming they can be in person. Really though, they use texting as a quick way to communicate the details: what time you’re meeting up, and where.

They’d rather not type out an entire conversation. They’re very busy relaxing somewhere, or rushing somewhere else because they spent too much time relaxing.

Gemini– Sending one text through a series of 18 unfinished sentences.

Geminis speak, think and act in an unfinished way. They probably use more emojis and gifs in a text message than any other sign, although Libra takes a close second.

The majority of the time, Geminis are extremely quick to respond, but they only respond with half-sentences. What would take you one text to write takes them five.

This is because they are often texting with seven other people while they’re texting you, and they feel it’s more polite (i.e. quicker) to send their messages in small bites rather than one large chunk.

No one hates the pain of watching a thought bubble more than this sign.

A Cancer writes a text message like Charles Dickens wrote “A Tale Of Two Cities.” They pour their hearts into it, and it’ll take you six months to get through the thing.

They’ve got a lot of feelings, and they need to get them out, so they’ll write them all down and send you something that will definitely make you say, “Couldn’t this have been a blog post?”

Leos much prefer to just send pictures of themselves rather than communicate in words. They’re incredible at expressing themselves, but a surprising amount of Leos are actually terrible spellers.

They prefer to avoid sending anything that makes them look less than perfect, so they’ll send you nudes — because nothing could screw up the message of how gorgeous they naturally are.

Virgo– Responds with a call.

Virgos are practical perfectionists, and to avoid anyone missing any details, or misinterpreting their tone, they’ll respond to a text message by calling you.

During the call, they’ll make quick small talk but get right down to the point, making plans about where to meet, what time, etc.

Then they’ll hang up and send a follow-up text with a google maps link and 17 calendar invites, “just to confirm.”

Libras need collaboration. They’re the sign of partnerships, so when they text you, they’ll have a lot of questions they want your input on.

What should we do? What do I wear? Is that what you’re wearing? What’s the atmosphere like? What will we be doing?

If you’re a more independent sign, this might be enough to drive you up a wall… but keep in mind, at least it means they like you. The less questions a Libra asks, the less they care.

Scorpios are the absolute best at driving their crushes, friends, coworkers completely insane, while they lay back and enjoy the power they have over other peoples’ emotions.

Life to them is a game of emotional “Jenga,” and they are determined to stay as steady as possible while everyone crumbles around them.

This is of course a sign of how unsteady they actually feel deep down, but don’t tell them you know that if you ever want a text back.

Sagittarius– Starts off with a joke and squeezes all the humor from it.

Sagittarius will text you a cute joke in the morning, something light and fun. You’ll text them back, riffing on it and then they’ll continue to tack on punchlines to their original joke throughout the day. It’s funny (at first), but after while you’re wondering who they’re trying to make laugh more: themselves, or you?

Capricorn– Always down to text, but not until you do.

Like other earth signs, Capricorns are more busy with practical matters, and prefer more down-to-earth communication like speaking to someone in person.

They aren’t against texting, but they’re more likely to do it when you text them first. Once you do, they couldn’t be better about it — unless of course, they’re at work.

Oh, and don’t expect a ton of emojis. Capricorns are far too refined for that.

Aquarius– Answers in the form of internet links.

Aquarians have a ton of ideas. Their heads are always full of theories, memories of things they’ve read, or seen or enjoyed, and they want to share these theories with the people around them.

Well, you got your answer, didn’t you?

Pisces– Texts, “U up” but never responds when you answer, “Yeah:).”

Pisces, even sober, text people like they’re drunk. They’ll ask what you’re up to, and when you say, “Oh I’m just doing xyz tonight, hbu?” they’ll never respond. They won’t even address it the next time they text you.

It’s as if they send a text, see something shiny, drop their phones and walk toward the light to be carried away by a UFO. When they come back, they have no recollection of what happened before.

Never, ever take this personally. Their texts aren’t a power play, their texts are just a perfect example of what it’s like to live in their heads.