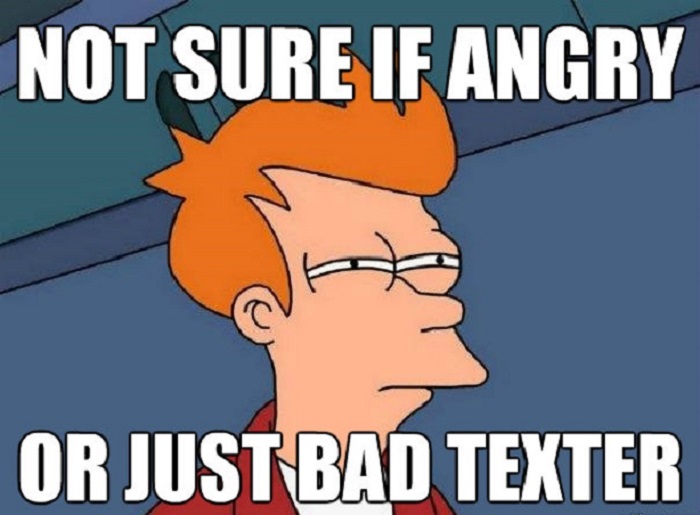 1. Pisces
The first thing this sign does when they get up in the morning is reach for their phone to check their notifications. And at night, they spend an extra hour in bed, scrolling through their messages. They never put their phone down. It is always this close to them, because they never want to miss a message.

3. Leo
This sign loves to show their enthusiasm. They will use a shitton of exclamation points. They will go overboard with the emojis. They will ask a million questions and send a million pictures. They will make it clear that they enjoy talking to you.

4. Taurus
A Taurus will text you back as soon as they get the chance. They might even sneak their phone out during work hours in order to answer you back. They love their friends, so they put in effort to keep their relationships strong. They never want to leave someone waiting when they could take two seconds to type a response back.

5. Virgo
This sign will send you a huge block of text that you actually have to scroll up your screen to read. They treat texting like a full-on conversation, so they never leave out any details. They also have no problem double texting. When they have something to say, they refuse to hold back.

6. Cancer
Cancers will read your message and then call you up to have a conversation with you instead of texting back. They hate feeling disconnected. Honestly, they would rather talk to you face-to-face, or at least over Skype, than over a screen. Texting isn’t their thing — but they will do it if it’s the only way they are able to contact you.

7. Scorpio
This sign never thinks about initiating conversations. It just doesn’t cross their mind. They can go weeks without talking to people they care the most about, because they get distracted by other things. But if you text first, they’ll always answer. They never leave you hanging when you need them.

8. Aries
This sign really only texts when they want to set plans with you. They don’t reach out to ask you about your day or how your big meeting went. They don’t have serious conversations over a screen. They would rather meet up with you and talk about those things in person. Their stories work better out loud, so they save them for your hangouts.

9. Sagittarius
This sign sucks at keeping in touch with people. They do most of their texting when they’re drunk. After a few drinks, they will reach out to the people that they haven’t spoken to in months just to see how they’re doing. They might even try to make plans with them — but when they’re sober, they never follow through on those plans.

10. Gemini
This sign takes forever to text back. And when they do, they will only give you one-word answers if your conversation starter was dull enough. They hate small talk, so generic texts like hey or what’s up bother them. They don’t want to waste their time talking to someone who has nothing to say.

11. Capricorn
This sign will only text you when it’s your birthday or a holiday. When they want to give you congratulations or condolences on a milestone in your life. Otherwise, they aren’t going to be striking up a conversation anytime soon. They don’t spend much time on their phones.

12. Aquarius
You’re lucky if this sign gets back to you at all. Most of the time, they read their messages, think of a reply in their head, and then forget to text back. Then they end up angry at you for not answering, because they think that you’re leaving them waiting — when really, they’ve been leaving you waiting. /By Holly Riordan