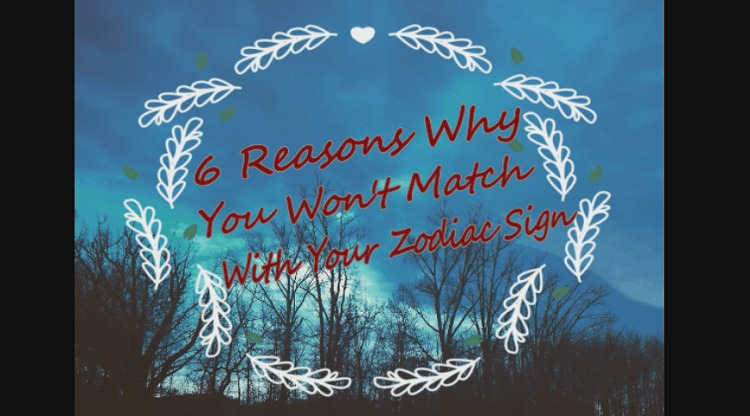 It seems that most people, even those with little interest in astrology know about their sun sign.

While many of us may embrace and identify with the characteristics attributed to our sun sign, others may not feel the same way. Undoubtedly, there are plenty who believe that their astrology sign misrepresents them. You might be one of those people and if so, you likely feel astrology has zero credibility.

But don’t count astrology out just yet. There is more to astrology than just the sun sign. If you are open minded enough, there is still some possibility that astrology can win your confidence. Here are 6 possible reasons why you may not identify with your astrology sign.

1. YOUR RISING SIGN
Also referred to as the ascendant sign, the rising sign is what some would say represents the actual, true us. It is the zodiac sign that was on the horizon at the time of birth. It is typically described as the face we show the world and the sign we most appear like to others who first meet us. It also concerns our self image, the way we desire to be perceived by others and also suggests the way we prefer to approach new situations. If your sun sign doesn’t quite fit you, maybe your rising sign resonates more strongly.

2. MOON SIGN
The moon sign represents the nature of the subconscious. Subconscious desires, memories, emotions and relationship with the mother. Depending on where the moon is placed and how it is aspected, the moon can have a strong presence in the birth chart. If a person is introverted, it is possible that the moon may have a more prominent role in the psyche so much so that the sun sign is marginalized.

3. STELLIUMS
Stelliums are clusters of 4 or more planets occupying the same sign or house in the birth chart. Not everyone has them, but their presence has an amplifying effect on the sign they occupy. It is believed that the combined energies of the planets infuse the sign in which they reside with greater power and significance than even the sun sign. A stellium may also indicate genius. Mozart had a stellium in Aquarius and Bruce Lee also had one in Scorpio.

4. YOUR SIGN PROGRESSED
Many people may not be aware of progressed charts. The idea is that for every year after your birth, your sun advances a day forward on the calendar which means that eventually, it will progress into another sign. For example, a person born on July 10 is a cancer. By the age of 12, the sun of that person will have progressed into the sign of Leo because Leo begins on July 22 which is 12 days after July 10. Each day corresponds to a year. This transition is said to indicate a spiritual evolution of the sun sign adding or modifying it’s base properties while developing maturity and gaining new perspective.

5. YOUR SUN IS AT ODDS WITH NEPTUNE
Neptune is the planet of deception and delusion. The sun represents the self and also how one relates to the father. If Neptune is negatively aspected with the sun, it may indicate a false or unclear sense of self. Neptune’s influence is highly subjective and can obscure and obfuscate reality preventing the true nature of things from being revealed or understood.

6. YOUR SIGN CHANGED
In case you didn’t get the memo, the signs of the zodiac have shifted. The dates commonly used in western astrology are based on the position of the equinoxes and the constellations they aligned with thousands of years ago. Since that time, the equinoxes have precessed several degrees and the zodiac constellations no longer line up where they once did. They have moved forward by about 25 days which means that if you were a cancer born July 10, then you were really a Gemini sign all along! You can find out if your sign shifted by checking the list of the sidereal sign dates found here.