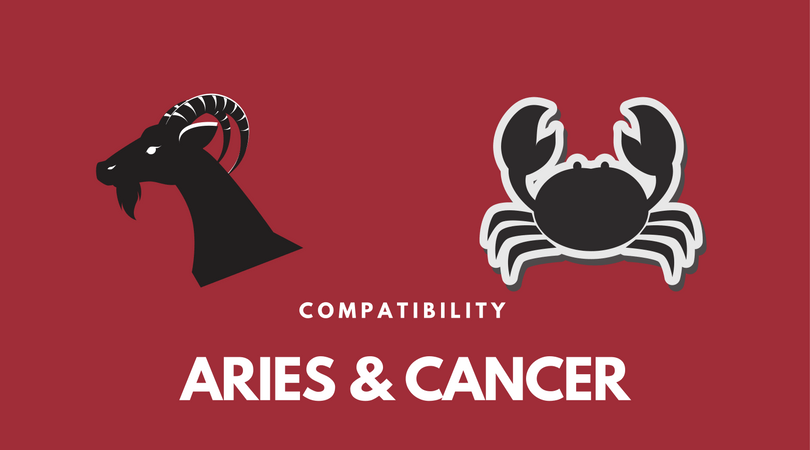 ARIES & CANCER S3XUAL & INTIMACY COMPATIBILITY
We usually see the sign of Cancer as extremely as3xual. Our family is presented by the sign of Cancer and the Moon, and it is a psychological challenge for all of us to understand that our parents are s3xual beings.

This would be fine if the members of this universal Cancer family weren’t convinced in their as3xual nature as well.

Their emotional characteristics allow only for s3xual relationships with meaning and enough tenderness.

Only when they meet the right person to set them free, they come to learn about the other aspects of their s3xuality.

The problem with s3xual relations with an Aries is that Aries partners are usually not that gentle to begin with.

They need to learn to show emotion. For them intimacy is something built, not implied.

If they manage to reconcile these huge differences at the beginning of their relationship and if none of them is forced to do anything they are not ready for, their attraction to each other should do the trick and their s3xual relationship could become truly sensual and exciting for both of them. The issue of trust is something different for this couple. They will rarely debate about their trust in each other’s fidelity.

Usually the problem they encounter is a trust issue when it comes to intimacy. Aries has a different view on intimacy.

In the eyes of their Cancer partner they can seem pushy and even aggressive with an attitude that doesn’t lead to anything close to relaxed.

As much as Cancer would like to understand the straightforward nature of Aries, it will be extremely difficult to see it as anything other than beastly.

There is also a problem with the way they show and recognize emotions.

It may be hard for an Aries partner to understand that they are loved if someone only asks annoying questions, tries to tie them down and doesn’t want to have s3x.

On the other hand, Cancer will probably feel violated in every way, unless Aries partner slows down and has an atypical show of gentle emotions.

Usually any sort of mistrust is a consequence of the lack of ability to believe in each other’s feelings for one another, for they don’t really recognize them well.

Both of these partners have the same tendency to act on an impulse and cut the conversation short before they even got to the point of it.

It is not their intention to react in this way, but they push each other’s buttons and it is very hard for them to stay focused and solve the issue they talked about.

Their interests differ too much, so even when they are trying to have a peaceful conversation about something impersonal, it is still a battle to keep the attention to the subject in question, whoever initiated the talk.

Their only shared characteristic is the cardinal quality of both signs, which gives them a good understanding on each other’s “ad hoc” personalities.

This will make it easier for the couple to recover from all of the possible conflicts and misunderstandings.

Still, in the eyes of a Cancer partner, this type of relationship doesn’t have a purpose and they might find themselves fighting in a way they don’t feel comfortable with.

As their signs are ruled by Mars and the Moon, it is an archetypal story of hurt and emotional pain, so their intentions have to be truly pure.

They have to treat each other in a gentle, thought-out way, measuring every word they say.

This can be exhausting for both of them, unless they fully accept the fact that they don’t need to change their personality, only the way they express it and make a game out of it.

Aries and Cancer are both deeply emotional, although Aries is often described as if they had an emotional disability.

They are warm, passionate and have high expectations of their partner when it comes to scratching beneath the surface. Their boundaries may be too strict as they fear their own sensitivity and sometimes act like heartless soldiers.

Cancer wears their emotions as a winter coat and hides them only when feeling ashamed to show them.

They accept their emotional nature as a given and work toward realizing a personal world full of respect for their soft side.

We often say that Cancer wants to have a family and raise children, but this is not due to their need to reproduce or stay in the house all day long, but because they need a safe haven for their emotional side and enough people to share their compassionate nature with.

Even though these approaches to their emotions seem different, they understand each other’s depth and in most cases respect each other in this area of existence, in case Aries leaves their impatient nature out of their relationship.

The problem appears when they are supposed to understand how they feel about each other, as feelings are not easily shown when dealing with partner’s personality they don’t fully understand.

ARIES & CANCER VALUES
While Aries gives a lot of significance to someone’s state of energy, focus and consistency, Cancer values the ability to stay rational and stable, qualities they have a difficulty achieving, or being in a state of emotional balance.

Their values aren’t even connected, except for the fact they both have the idea that some sort of future balance, that can be quite hard to achieve, would make them better.

ARIES & CANCER SHARED ACTIVITIES
As much as Aries wants to devote to their physical body, sports and all the ways to keep their creative energy high, Cancer wants to sleep, dance and eat all they long.

Mostly they share s3xual activities and the time for rest, since Cancer probably has no intention of following that insane Aries pace.

SUMMARY
This relationship can be painful for both partners and needs a lot of work put into it in order to work.

It requires both of the partners to adapt and make changes in their behavior, while tip toing around each other most of the time.

It is not an easy road, but the rewards are such inner understanding of passion, full of emotion and the ability to create something truly unique. If they succeed, they will probably never be satisfied with a different partner.