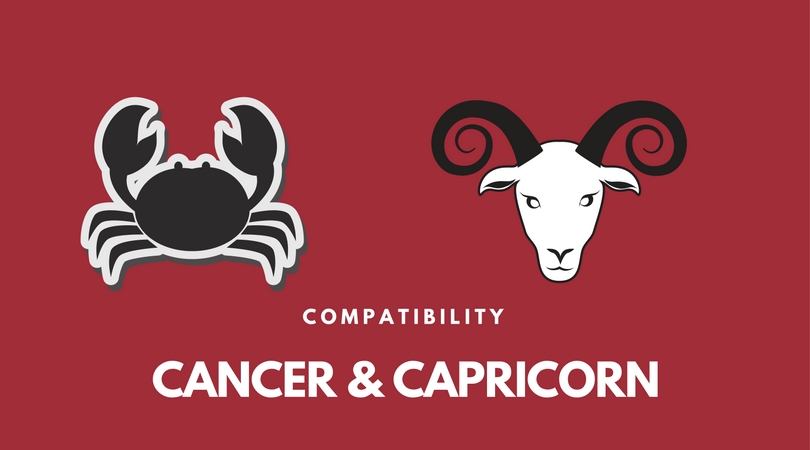 CANCER & CAPRICORN S3XUAL & INTIMACY COMPATIBILITY
Cancer and Capricorn are opposing signs and there is a strong attraction between them. When they get together, a passion awakens and they both become perfect lovers for one another.

The patience Capricorn has for their partner is something Cancer really needs to relax and start feeling s3xual to begin with. Capricorn needs someone who acts on true emotion, but also someone who doesn’t take s3x lightly.

There are Capricorn representatives who have changed many partners, but they will probably never stay with the one that isn’t family oriented and emotional when it comes to physical relations.

Intimacy Cancer can create is exactly compatible to what Capricorn lacks. There is a lack of love, home and warmth in the sign of Capricorn, and Cancer partner can heal this with their highly compassionate approach.

This could lead to thawing of Capricorn’s emotional state and uplift the state of their s3x life significantly. Although Capricorn might seem trustful, they are probably one of the least trusting signs of the zodiac.

Not only is the sign of Pisces in their third house representing the way they think, but they are also often led by panic in their intimate relationships.

When a Capricorn representative falls in love, they will understand that their partner needs to see trust and this is what they’ll show.

However, they could have trouble believing anything their partner says until some consistency is proven or their stories checked out with other people.

Luckily, in Cancer’s world there is often nothing that ugly and secretive to find, for their moral values are as high as the exaltation of Jupiter in their sign. For as long as Cancer feels Capricorn’s devotion, they will not question their actions.

This is why Cancer could easily sense their partner’s lack of trust, pretend that they didn’t notice, and find it endearing rather than repulsive. This is a couple that has the strangest thing in common – genetics. Not literally, of course, but they often share their image of a relationship their distant relatives had, maybe centuries ago.

There is information in our emotional body, about each emotion our ancestors have felt and didn’t know how to deal with or how to use.

These partners could feel like they have known each other before they’ve actually met.

Their mutual affection will seem familiar and warm, as if they grew up in a same house, even though their circumstances might be completely different.

This could make them able to talk about anything, for there is closeness to the relationship of these two signs that is unexplainable to all others.

However, if this emotional bonding doesn’t come at first impulse, Capricorn could be very difficult to talk to from Cancer’s perspective.

They need to connect on a very deep level, or they will have opposite goals and Capricorn could seem like a career obsessed lunatic with no emotion what so ever, while Cancer could seem like a clingy housewife (no matter if male or female).

They should both remember that if they see each other in this negative light, they are probably only hiding from their own, inner opposite side, dismissing the chance to be complete.

Cancer and Capricorn are a love story their ancestors had, waiting to be resolved.

Although this could sound like a dream come true and could in fact create very strong emotions in both partners, there is almost always a karmic debt to be repaid before they could say they are truly happy together.

These signs represent the axis of Jupiter’s exaltation and fall and it is important to understand that their emotional states are closely linked to their expectations from each other and their relationship.

These two are considered one of the most and one of the least emotional signs of the zodiac.

One of them should be family oriented and the other turned to their career. Still, their emotions often run wild as soon as they lay eyes on each other.

In time, they will both fight for security and stability of their relationship, and although it might be hard for them to reconcile these primal emotional differences, they will in most cases simply – find a way.

The emotional depth of Capricorn is really hard to reach, but Cancer partner can approach this as their life challenge.

When they get tied to each other, it is almost impossible for them not to get married, have children and the entire earthly love package.

Still, they could take so much of each other’s energy if they tried to change each other. It is best for them to accept each other’s personalities as inevitable and impossible to change.

This could lead to a more sensible future than the one in which they are both simply tired of each other.

CANCER & CAPRICORN VALUES
They both value stability and practical sense. As opposing signs, they can seem to have opposing values, but this is not really the case.

They both need stability in their lives and will value people who give them the sense of security.

This is probably something they will value most in each other, the ability of both not to quit or give up, however hard things might get.

CANCER & CAPRICORN SHARED ACTIVITIES
Cancer is not very picky when it comes to activity choices their partner has, for as long as they are not imposed on them or too aggressive for their taste.

Capricorn is careful and will plan their activities well in advance, so both of them will have time to adjust to the idea or change their minds if they realize that this is not what they want.

It will be very easy for them to agree on what they want to do together and find such activities, only if they respect each other’s personalities.

Capricorn will not want to go shopping for house decorations, no more than Cancer will want to go three nights without sleep just because of a project at work.

If they respect each other’s boundaries, their time spent together should be truly satisfying for both.

SUMMARY
Cancer and Capricorn are usually bound to relive the love story of someone who lived before their time.

This deeply seeded need to mend what is broken in our family tree is something we all carry within, but these Sun signs are predestined to handle karmic debts and residue emotions from their families.

They will have to deal with problems first if they want to be free of the past, and only after they have repaid what needed to be repaid, will they be able to truly choose one another.

In most cases this is a once in a lifetime love for both partners, and they will probably choose each other without a doubt.

What’s the best thing about the Cancer-Capricorn relationship?
Their utter dedication to one another and their mutual commitments toward shared goals.

Both are lovers of quality and of beautiful, luxurious things, and neither shirks at the idea of a little hard work if that’s what it takes (in fact, Capricorn would rather be working than almost anything!).

Their shared passions, sense of responsibility and morality make theirs a highly compatible relationship.