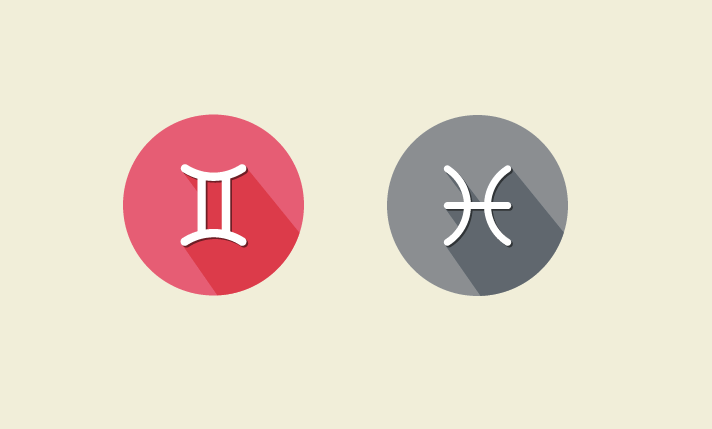 GEMINI & PISCES SEXUAL & INTIMACY COMPATIBILITY
It is a good thing there is so much creativity to Gemini’s approach to sex, or they would really have difficulty making any sort of intimate connection with Pisces. They can be attracted to each other due to the fact that they are ruled by Mercury and Jupiter, the same planets that rule their opposing signs. Still, there is a big chance they won’t even recognize each other as sexual beings or keep a distance from each other if they do.

Gemini has a lot of creative potential, but isn’t exactly in search for their one and only true love in order to have sex. Pisces, on the other hand, exalt Venus, and they only want to have sex with the love of their life, unless they’ve been disappointed too many times. If they meet after these numerous disappointments, Gemini will not find Pisces very attractive, for they will no longer have any childish energy or charm.
If their sex life is supposed to be functional, both of them will have to find a way to be a bit more grounded than they normally are. Gemini will have to realize the truth behind their own emotional nature and give in to true intimacy, while Pisces will have to accept the differences of their partner instead of searching for a soulmate with predefined qualities.

GEMINI & PISCES TRUST
Trust is already a weak spot in almost every relationship these two can have and when they get together, there is a chance they will have no idea how to create any trust between them. They have completely different ways of dealing with their emotional relationships and their issues with self-image, and they will think of many different ways to bend the truth when they are together. Unfortunately, when any of them lies, they won’t have much success. Gemini is too smart to be lied to by their Pisces partner, and Pisces sense their Gemini partner’s state too well to not realize when they’re not telling the truth. Basically they both dip into each other’s unconscious and see each other in the way that none of them looks at themselves.

GEMINI & PISCES COMMUNICATION AND INTELLECT
There is always a fairytale or two to share between them and some fun to have when they go out. They will laugh together, but this is a strange connection with a lack of real communication. Gemini can decide to make a joke and Pisces will laugh without really thinking about it. Pisces will then say something to poke their Gemini and Gemini will laugh without thinking about it. It is as if they never really listen to each other and sink into a strange pool of superficial relationships and small talk.

If they start discussing their deep thoughts and feelings, they might end up in a conflict that none of them anticipated. We could say that they idealize each other, but only to a point of recognition. Neither Gemini nor Pisces will think of each other as their one true love unless they really are each other’s one true love. So they will have this image of each other that is deviated from reality, due to the fact they don’t really listen to each other. The only possible way for them to have a conversation with depth is in a situation in which they have absolute emotional intimacy, such as family members usually have.

GEMINI & PISCES EMOTIONS
Gemini is one of the most rational signs in the zodiac and Pisces is the cureless romantic and one of the most emotional signs. When they do fall in love, they are rarely on the same frequency and often only one of them has true emotions for the other. They represent ideal candidates for an unreturned love scenario and can be a nuisance to everyone around them if they end up in a relationship with no emotional balance.

GEMINI & PISCES VALUES
They both value what they stand for and although Gemini values someone to listen to them and love them unconditionally, this is not the same as the passionate love Pisces partner wants to have. In general, they will both hold on to what they know best and Gemini will value intellectual strength and won’t get very disturbed by dishonesty for as long as their image of a relationship isn’t disturbed. Pisces will value their partner’s reliability and trust is very high on their list of priorities.
Still, there is one thing they will share, hidden in the fact that they both value someone’s ability to create. Even though this comes out of different views on creation, it can bond them in the act of creativity. Pisces would provide talent and inspiration and Gemini their resourcefulness and practicality.

GEMINI & PISCES SHARED ACTIVITIES
When we speak of Gemini and Pisces, we have to keep in mind that both signs are mutable. Although their interests might differ greatly, they could find activities to share due to their mutual need for movement of any kind. Pisces will normally dream about movement rather than actually move and this is exactly what their Gemini could teach them – how to make the first step.

SUMMARY
Gemini and Pisces are squaring signs that often don’t have that much in common. They are both usually positive enough to have a superficial enjoyable relationship and go well together at large social gatherings. They could both forget to call each other when they agreed to, and they can both change their opinions in two seconds, but they simply don’t share the same goals. As a strongly mental and a strongly emotional sign, their lack of understanding can be hurtful for Pisces and sometimes for both of them. If they do fall in love and start a romantic relationship, chances are they will not last very long.

However, there is a beauty in the creative side of this relationship and if Gemini decides to truly listen to Pisces, they could help them use their talent in a constructive way. In most situations Pisces will just drain the energy out of their Gemini partner, especially if they end up in their fragile, needy mode that some other signs could understand much better than Gemini. If they are to succeed in their persistence to be together, they should work together and socialize a lot. The most important thing for both of them in this relationship is to reach for their emotional cores and give in to true intimacy, or they will never manage to communicate.