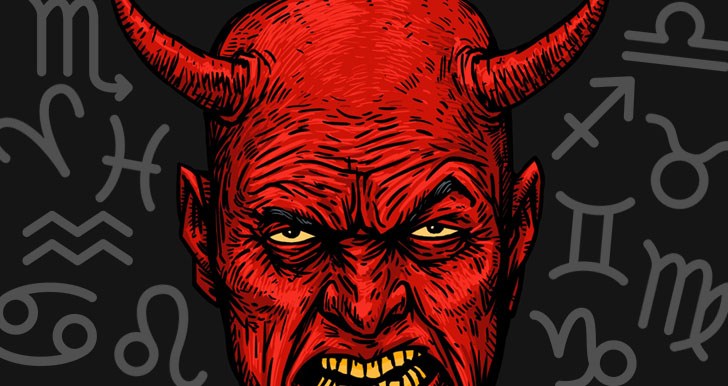 Some of the zodiac signs might like to think that they are innocent and perfect in every way… but the truth is that sometimes they can be anything but.

Sure they might be charming and funny when they’re at their best but every so often they can do things just really grind the gears of even their closest of friends and loved ones.

So brace yourself because today I’ll be taking a look at the negative traits of the signs!

Aries negative traits: they can be impatient, demanding and stubborn as hell.

The Aries can get so caught up in their own hectic and fast-paced lifestyle that they get frustrated with those that can’t keep up. They want the whole world and they want it yesterday and they can be kind of impatient when it comes to getting it.

Their temper can be notoriously short when faced with incompetence and they’re definitely known to explode from time to time. They can be stubborn as a mule too when they are certain that they are right!

Taurus negative traits: they can be overly materialistic and fall into the trap of trying to ‘keep up with the Joneses’.

The Taurus is known for being a hard working individual who is willing to work their butt off in order to get ahead. Sometimes however they can fall into the trap of constantly trying to ‘keep up with the Joneses’ and stress over material things that really don’t really matter all that much.

They can burn themselves out and even find themselves on the verge of a breakdown if they don’t force themselves to take a break from time to time. Money is great and all but balance is essential to maintaining sanity!

Gemini negative traits: they can be crafty, manipulative and two faced.

The Gemini is a crazy intelligent sign but sometimes they can be a bit too cunning for their own good. They know exactly how to manipulate people and situations to their advantage and can be scarily good at the art of deception.

If you get on their bad side watch out because they will drive you insane with their mind games.

Cancer negative traits: they can be hella moody and crabby as f#*k.

It’s a well known fact that the Cancer zodiac personality tends to be a bit emotional.

But when they get really upset they can take the meaning of “emotional outburst” to a whole new level by becoming so moody and crabby that they are almost unbearable to be around.

When they’re having a seriously shitty day you might be best to just leave them alone for a while to work it out.

Leo negative traits: they can be vain, bossy and overly sensitive to criticism.

Leo personalities often have many grand plans and visions in their head about the things that they wish to accomplish and they can be kind of bossy and demanding in their pursuit to turn those dreams into a reality.

They can also struggle with criticism even when it’s meant to be genuinely constructive and they aren’t so good at giving up the leadership role when they want to be in charge.

Virgo negative traits: they can be fussy, overly critical and hold people to unreasonable standards.

The Virgo is a bit of a perfectionist and as a result they can come across as, well, kind of pedantic and critical. They can’t stand to see things done in a half-assed way and they can be quite harsh when it comes to critiquing sloppy work.

They have a habit of holding the people around them to an exceptional standard that isn’t always realistic. Sometimes they just need to chill and manage their expectations.

Libra negative traits: they can be manipulative and and a little *too* good at lying.

Libras are so clever and charming that they can easily pull the wool over someones eyes should they choose to do so. They’re so damn persuasive too that they could probably convince somebody to sign their soul away to them.

They mostly try to use their powers for good but when someone crosses them they can find it too hard to resist the temptation to strike back when they least expect it!

Scorpio negative traits: they can be aggressive, controlling and obsessive.

Scorpio is the kind of personality that can either be the nicest or the meanest depending on whether they like you.

If they have a problem with you they can become aggressive fast and those that dare to cross them will learn just how sharp the scorpions claws can be.

They’re also known to be a bit obsessive aren’t very good at letting go of past grievances and old grudges. Sometimes they just gotta learn to move on!

Sagittarius negative traits: they can be insensitive, impatient and a bit of a hothead.

The Sagittarius personality likes to just say whatever is on their mind no matter how blunt or direct it may be. And whilst some can find this honesty refreshing for others it’s just too much and they can get quite offended by what they perceive to be the insensitivity of the Sagittarius.

They’re also not the most patient sign in the zodiac either and they can get easily irritated when they encounter delays or get slowed down by others.

Capricorn negative traits: they can be pessimistic, condescending and insensitive to others feelings.

The Capricorn likes to think of themselves as a skeptical realist but to some their attitude can come across as downright pessimistic.

People can get frustrated when Capricorn shoots down their “dumb ideas” and sometimes they wind up bitter and resentful as a result. It’s not that Capricorn deliberates sets out to alienate people… they just have very little patience for stupidity.

Aquarius negative traits: they can be overly secretive, emotionally distant and hard to get close to.

Aquarius isn’t exactly an open book that just spills their secrets when you say ‘go’. When they don’t want to talk about something it can be like drawing blood from a stone trying to get any actual information out of them.

They’re prone to putting up emotional walls which can sometimes frustrate their friends and loved ones but the Aquarius personality just needs to work through things in their own way.

Pisces negative traits: they can be self-pitying, indecisive and a bit of a scatterbrain.

The dreamy like state that Pisces often finds themselves in can result in total indecisiveness when it comes to making crucial decisions.

Some days they can struggle to get their thoughts in order so damn much that they constantly find themselves losing things, forgetting things and just generally being a bit of a scatterbrain.

They can also get caught up in negative trains of thought and need to be careful that they don’t fall into a state of always feeling sorry for themselves and instead focusing on the good in their life! /ZodiacFire