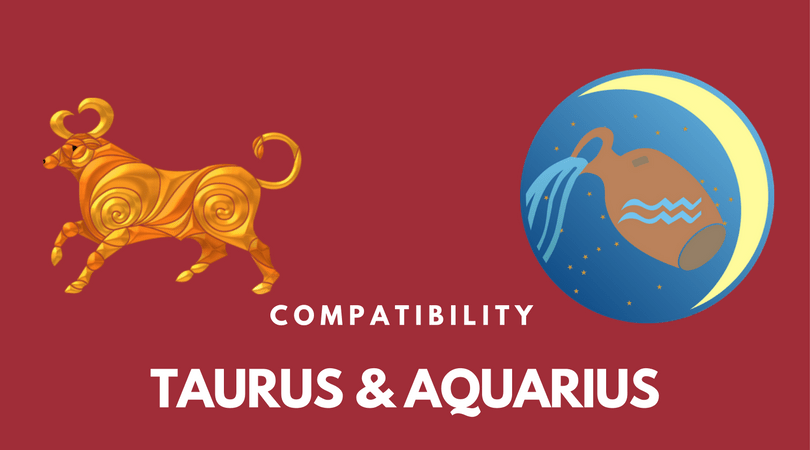 The slow, tender and smooth nature of Taurus will be ridiculously annoyed by the changeable and unusual nature of Aquarius. In most cases, they are not even attracted to each other and think of each other as boring or crazy, depending on the situation.

However, they could really help each other blossom if they opened up for the possibility of unusual s3xual encounters.

If the tenderness of Taurus is projected on their independent, distant Aquarius partner, their creative and motivating side would awake, giving energy and speed to the productive gentle side of Taurus.

Imagine the s3x life they could have, different from each other, two outcasts, if they only shared enough respect and emotion.

They will rarely get this far, for they seem to be looking for different things in a relationship to begin with. Taurus would like to have a secure, unbreakable partnership and Aquarius wants to be free of any attachment to this world, let alone emotional relationships.

It is not easy for them to mend these differences or keep them out of their s3x life, because they wouldn’t feel like themselves in a relationship with disregard of their primal needs. If Taurus wasn’t so stressed out by their Aquarius partner, they might decide to be true and honest. Aquarius doesn’t really understand the attitude Taurus has and least of all their fear of not being good enough.

Guilt and self-criticism is the most difficult trait of Taurus, and one Aquarius is free from, finding it obsolete. This strict Aquarius opinion will scare Taurus to the point where they feel it is impossible to tell how they feel. This will end in a circle of lies and mistrust that cannot be repaired.

There seems to be no flexibility in an Aquarius partner, although they tend to show a nature that is so open for people’s differences.

In order to build the subtle trust, Taurus needs to be brave and stop thinking about the consequences of everything they say, while Aquarius needs to let go of their righteous attitude and be careful about the way their Taurus partner feels in their presence.

As a contact of Earth and Air elements, they can be so far apart that they can’t find anything to talk about.

The sign of Taurus brings Uranus to its fall and all of those bright ideas Aquarius has, seem to go through the sieve of reality given by Taurus. This wouldn’t be a problem per se, but sometimes the narrow-minded Taurus doesn’t exactly see the true possibilities of the material world and can bring down their Aquarius partner to the point where they don’t see how any of their dreams is possible.

If Taurus shows understanding for their partner’s need to fly, they could actually help them materialize what they have dreamed about. This doesn’t happen often, for Aquarius rarely finds Taurus as a person to talk to, slow and boring with a “small town” attitude that inhibits the progress of our civilization.

Their differences are hard to reconcile and when they fall in love, every little thing could become a huge problem and a reason for both of them to think about ending the relationship.

In general, they can find that they aren’t exactly made for each other, unless they both have enough flexibility to understand the ultimate difference in others, and enough openness to do things they don’t care about just to see if they like them in the end.

They are lucky that the sign of Aquarius lifts up spirits of Venus, or they wouldn’t really stand a chance.

Taurus will rarely fall in love with an Aquarius due to the fact that they don’t recognize their ruler in a good context. Aquarius is distant enough as it is, and without excitement some other signs might offer, they will not exactly feel the electricity of being in love with an unmovable Taurus.

However, they both might get tricked by the middle ground between them. If Taurus sees the stable, Saturn side of Aquarius, and Aquarius recognizes the inner child in their Taurus partner, they could discover that they do belong together, even though this goes against the odds.

While Taurus values material things and grounded behavior, Aquarius values freedom in any shape and form.

One of them wants to be tied down, and the other wants to fly. There is really not much they can do, but accept the differences of their goals and natures, for there is truth and good in both approaches to life.

They can find certain things to value together, if they put their minds into creating them through Aquarius field of ideas and Taurus’ practical realizations. For a short time there could be a number of beautiful things they could do together. After the recourses of Taurus have been spent, there is not much else they will want to do together. By “recourses” we don’t necessarily speak of money, but the overall energy for action.

Taurus will gladly visit a strange place they have never been to, but after this, they will want to come home and have a nice dinner. Aquarius doesn’t have this need and wants to always be on the move.

They could be taken care of through the efforts of their Taurus partner, if they had enough patience to keep them well fed, dressed in clean clothes and took care of household activities. Still, this compromise is rare to find, because the emotional satisfaction Taurus partner will get in return is not enough.

Taurus and Aquarius are people from two different worlds. Still, there is a strange similarity and connection between their rulers and although very challenging, this is a relationship where both partners could fall in love with each other, over and over again, every single day.

They are ruled by Venus and Uranus, both planets rotating in a direction opposite to the direction of other planets. They are two outcasts, different and standing out together, they understand that East can be where West is, and vice versa. They understand diversity, change of direction and the excitement of love.

However, they will rarely get to the point to understand each other because of their excessive need for peace (Taurus) and excitement (Aquarius). What a strange pair these signs are. With such an obvious opportunity for electric love, they go around it and search for something else.

What’s the best aspect of the Taurus-Aquarius relationship?
Their unstoppable team power that is possible once they clear their path of obstacles. Both Signs have very powerful personalities, so neither will dominate the other — no matter how hard they try!

This relationship can be truly exciting and satisfying once these two Signs work out how it’ll work between them.