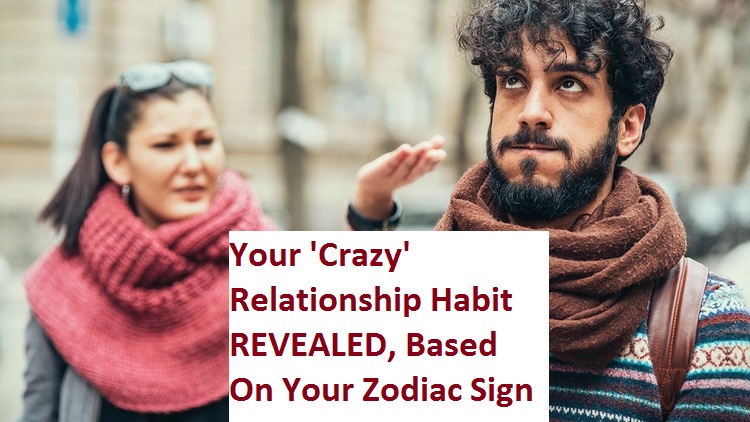 We all have that one crazy relationship habit on repeat. Luckily we don’t need to look further than the stars above to determine what our bad habits are.

Here’s what your crazy relationship habit is, according to your Zodiac sign, because knowing what your biggest flaws are can help you get closer to the romantic relationship you desire.

They say that an Aries is creative, adaptive and insightful. When it comes to dating, that means she likes to live in denial about how bad your date just went. Sure, you’ll go along to get along, and maybe you’ll laugh off the fact that your date stuck you with half the bill after leading you to believe he’d pick it up, but when you’re bitching about it to your best friend, you’ll do it with every bit of insight you didn’t have when you went on the date.

By nature you’re stubborn and, well … bullheaded. Dating for you is, without question, a contact sport.

Taureans are often the hardest to please in bed, so chances are if you let a guy spend the night, not only is he on the clock, but he’s under a performance evaluation. Because of your perceived strength, men will unload their deepest, darkest secrets and fears, usually resulting in awkward breakups, coldly done via text message.

Geminis are all about balance. Everything has to be on the up and up. When dating, a Gemini is the most likely to be OK with splitting the bill. Not surprisingly, Geminis have a better chance of acting bipolar while dating, if not during life in general.

Men will be attracted to this, as love/hate relationships often lead to the hottest sex. Geminis tend to be fairly charismatic, so it’s likely that only half the men who actually want to ask you out, largely out of fear of failure, will do so.

If you’re a Cancer, when you go on dates, it’s in hopes that the next guy will be the one who brings home the bacon so you can fry it up. That’s not meant to be completely sexist, but Cancers love to play Suzie Homemaker, even if they don’t actually do that sort of thing.

Cancers are conservative, so you’re going to make your man work to get laid, because you ain’t no hollaback girl. However, for all your traditional desires you crave your alone time, which means you end up sending out a lot of mixed messages, resulting in being single more often than not.

If you’re a Leo girl, you rule the roost. On dates, you’re often the one who picks the restaurant, the coffee shop and which side of the bed he gets to sleep on.

You have no problem letting someone know you’re right, and because you’re such a leader you rarely spend time alone unless you want to. But despite all your regal bluster, you’re a kinder queen at heart. But you’re still a queen, so you’re all about ruling the roost.

By far, Virgo women are the best at the art of dating. When it comes to witty conversations that feature actually interesting topics, no one does it quite like Virgos.

That also means that you compile all the information you draw out of your date/victim in order to use it against them later. Even though you make for a great date, sometimes you go out of your way to overanalyze everything, resulting in more than a few tears.

Like Geminis, Libra ladies believe in balance, but more so as it pertains to stability. When you date, you’re just hoping you haven’t run into your future psycho ex.

Libras are generally more conceited and value looks over substance more than they’d like to own up to. Libras cheer for the underdog, so expect to date more underachievers who come up with a good story, compelling you to pick up the check more than once.

Scorpios can be ice queens, often frozen from the inside out. When you date, you’re goal-driven, whether it’s to get the poor sap you just suckered into a yet another date to finally put a ring on it, or just to get him to break down and give you your way all the time.

Your biting, argumentative nature packs a wallop that usually forces married couples into therapy before divorce.

Sagittarians are all about loyalty and demand the same from those they date. This makes you an extra picky dater, as you’re unlikely to settle for less and want to see results right away.

Many men will try and fail to win your favor, but the ones who do will likely end up in a long-term relationship with you, or at least become obsessed with you to the point of personal ruin.

The other side of this coin is that if you’re not ready for something long-term, you’ll refuse to be tied down and end up breaking plenty of hearts.

Capricorns are smart in life and smart in dating — maybe a little too smart for their own good sometimes. Because you’re goal-driven and believe in order, you have very little time and patience for dating people who aren’t.

Because of your hypersensitive nature, whoever you date better not ever say you look a little fat, because your inability to deal with criticism means you’ll dump him or his cold, dead body in the local landfill the first chance you get.

Aquarians are simple folk who do almost everything quietly. When you have sex, you give your mates a complex because your silence forces upon them the anxiety of poor performance.

By that same regard, your honest and loyal nature will make you the target of a number of scumbags who stand you up on dates. You’re also lazy as hell; when you bring a guy back home, for god’s sake, make sure you clean up your room.

As a Pisces, you’re highly intelligent without flaunting it. Most of this intelligence comes from learning from the past mistakes you make in dating due to your gullibility. Part of trusting too much means you’re also honest and unselfish, yet your determination to succeed means you don’t spend too much time dwelling on a failed date.

Even though your love life is a dumpster fire, you’re the best friend who helps counsel friends and bring them back from the ledge of their own failed dates.