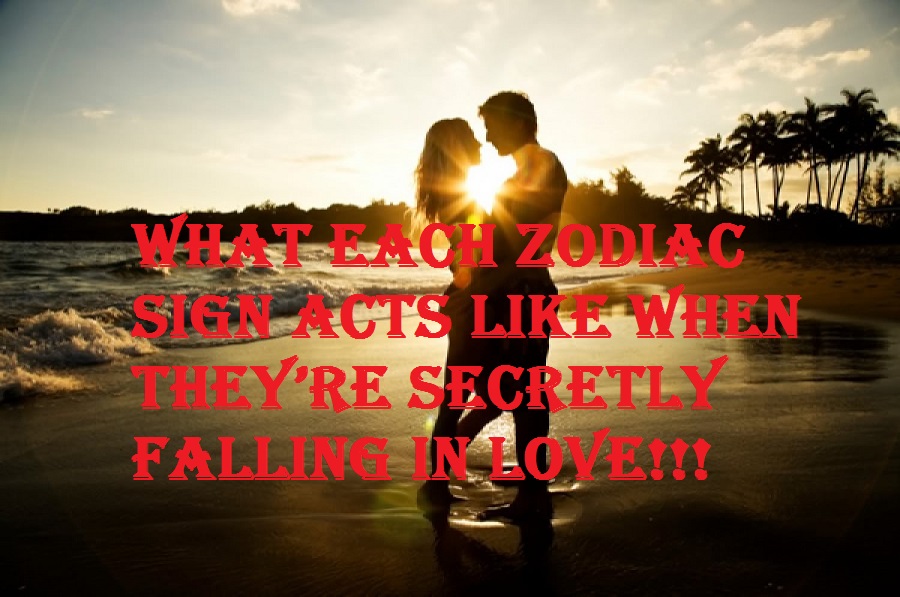 They’re forward about it. They’re super interested in your life, and ask a lot of questions. You will feel like you are always the object of their interest, because you are. When Aries begin to fall in love, they want to know everything about you. You usually won’t have to guess too much about their intentions. Mixed signals are a signal that they aren’t quite there yet.

They’re testing you while they woo you. This one may seem a little confusing right off the cuff, because while a Taurus is seducing you and paving the way for a storybook romance, they can also seem a tad standoffish, or at least like they don’t quite trust you yet (spoiler: they don’t). A Taurus is guarded until given reason not to be.

They’re very clearly in love with you. Geminis have 0 chill when it comes to romance (or really, anything) but especially love. If they’re going to be swept off their feet, it will happen right away. Thankfully, they are also committed to their infatuations, so while it will go quickly, it won’t burn out right away. If you suspect a Gemini is coming onto you, or at least is interested, you’re most likely right. After they’re given a little affirmation that you’re alright to pursue, you’ll know for sure.

They try to make you laugh. Also, they’re both infatuated but cautious. Cancers are the most notoriously emotional sign in the zodiac, and though they love hard, they worry even harder. They want to make sure they aren’t going to get their hearts broken, but at the same time, can’t always help it if their emotions are super powerful. When a Cancer cares about you, you’ll immediately sense that they want to spend tons of time with you, want to be your BFF and partner, and will go out of their way to do whatever you need to be comfortable and happy (even if you’re just at the friend stage).

They become protective of you. Leos are notorious for their sense of self (or, let’s be honest, ego) so when they begin to fall for you, they want to be yours and yours only. If you’re not at the point of being in a committed relationship yet, they’ll do other things to signal that you’re “theirs,” like tell you how happy they are to be out with you, or put their arm around you in public. They become super charismatic and make you feel like you wouldn’t want to be with anyone else.

They act like they are not interested at all. Virgos are weird like this: when they love someone, but don’t know if it’s “safe” yet, they’ll play it off like they don’t really care. The more weirdly “chill” a Virgo is being, the more likely it is that they’re into you. Don’t worry though, it’s mostly a poker face: over time, they’ll let you know how they feel (they’ll be terrified, but they’ll do it).

They become indecisive. Libras are the lovers of the zodiac, but they’re also the managers of balance and peace. When they fall in love, their worlds are knocked over, so they are super cautious to weigh all the possibilities before they really let themselves fall (they just want to know whether or not the person is worth all the hassle).

They are loyal, and territorial. Even though they play it totally chill, they are secretly wide-eyed and insane on the inside, worried that you’re still seeing other people or that you aren’t as into them as they are you. Scorpios are known for being extremely loyal to the people they love, so they do the worst during the in-between phase of “dating” and “in a relationship.” They just don’t operate like that: they are the epitome of “everything or nothing” personalities.

They want to do everything with you. A Sag that’s into you is asking you on weekend trips, taking you to places you’ve never been, trying to make you laugh, and so on. They’re just trying to see if you can be their partner in crime, because their whole lives are about doing, doing, doing. The more they want to experience with you, the more they’re interested.

They’re asking questions about the future. Capricorns are planners, and want to be grounded at all times. They do not like not knowing where they stand, and will not continue to be interested in a relationship if they know it’s not going anywhere.

They’re spending time away from their goals for you. An Aquarius will always be in a relationship with their work first, so if they’re taking any time away from that to spend with you, you will know that they really are interested. Even if they say they can’t afford to be distracted right now, focus on their actions over their words – that will tell you everything you need to know.

They’re basically writing poems about you and crying a lot. When a Pisces begins to fall in love they are *absolutely in love* right away, they feel the most, and you’ll probably see that right off the bat. Even if they aren’t creative (though most Pisces are) you’ll know that they’re interested because you seem to inspire them in a way, even if it’s just to get their lives together more or move across the country or whatever else.