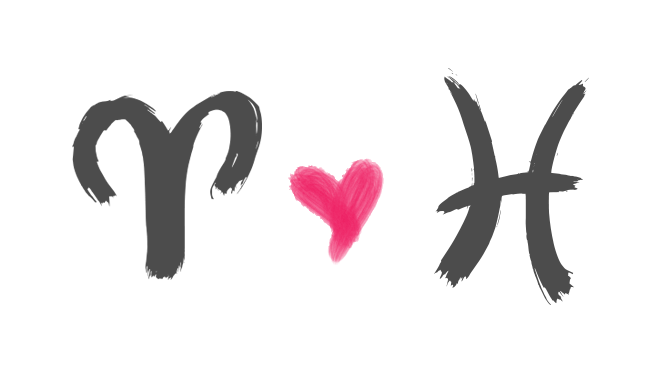 ARIES & PISCES SEXUAL & INTIMACY COMPATIBILITY
Aries and Pisces are two signs that really have trouble connecting. The beginning of all things lies at 0° of Aries and their end at 29° of Pisces. Their connection is like a “little death” making room for all that is new, untamed and inexperienced. It is hard for them to bond, as much as it is hard for all of us to transcend, go beyond our physical body and be one with the Universe. With that said, it is understandable how difficult it is for their sexual natures to accept one another.

Aries stands for instinctive sex. The sign of Pisces stands for orgasm. Although Aries cares about their orgasm, they will not make an art out of it. Pisces would rather satisfy themselves than be with someone who doesn’t understand the art of orgasms. When they end up together, it can be torture for both, because they just don’t understand what each of them needs. Aries would even have some success in understanding the need for tenderness and physical touch, but what Pisces want is like an unreachable wonderland that no one needs. In fact, they simply don’t understand what it is they need. Aries looks like an inexperienced child to their Pisces partner, and although this can open the door for Pisces to enter this relationship, it does not feel that good when they realize that this is not about to change.

If they are both open enough to find their intimate language, their sex life has to be weird and kinky if they want to succeed. Pisces will feel suffocated in anything ordinary and less satisfying than what they know they deserve, while Aries is usually not very interested in sharing emotions all night long and waking up in the afternoon.

ARIES & PISCES TRUST
With Aries holding their head high, their attractive, straightforward attitude and their libido, it is not easy for sensitive Pisces not to pick up those signals emitted all around. This will immediately give effect to the degree of their confidence. It is hard to open up when you don’t trust your partner, so Pisces will stay in their little world for as long as they can, only to avoid being hurt and lied to. Aries will see their partner’s world as a phony, unclear image that there is no need for, and find their Pisces partner shady and unworthy of their trust.

ARIES & PISCES COMMUNICATION AND INTELLECT
Aries and Pisces could find many things to talk about if they open up for each other’s support and advice. Although they are interested in entirely different things most of the time, they are still connected as neighboring signs and have a way of leaning on each other. Through their relationship they need to learn about their own weaknesses and how to mend them to be complete. It is not exactly as they complete each other, but the effect they have on each other can be like the correct medicine.

Aries has a tendency not to look behind, question the past, or be too sharp and fast for their relationships. They could also have an ego with a shotgun, waiting for any potential partner to pass by and kill their desire to even think about dating an Aries, let alone be serious about a relationship with them.

Pisces are sensitive enough to explain to Aries how they should soften up but keep their boundaries strong. Pisces represent a dream land of Aries and they are able to show them that they could actually have a mission and a higher purpose, instead of just chasing through life.

In return, Aries partner will help their Pisces partner find their grounding. They will not be that gentle about it, that is guaranteed, but could be realistic just enough to show Pisces how important it is to have initiative and build something you dream about in the real world. If they start their intimate relationship on these foundations, they could easily discover their middle ground for other segments of their relationship.
In case they are not so open to change and are not in search of someone to help them create, they will hardly share many topics they both find interesting.

ARIES & PISCES EMOTIONS
Their emotional worlds are like two different planets that rule their signs – Mars and Neptune. While Mars, the ruler of Aries, is covered in rust, a red colored desert with volcanoes, canyons and weather, Neptune is a blue gas giant, cold, whipped by winds and much farther from the Sun. This is exactly how their emotions differ. Those that Aries cherish most are well defined, strong, protected, and colored in a color of passion. Pisces on the other hand, have a windy and changeable emotional world, colored blue like the color of sadness and vision, and are easily cooled down as soon as they feel disappointment.

ARIES & PISCES VALUES
It is strange how they both value honesty and have such trust barriers when they get together. When they get involved, trust becomes something like a sole purpose of their entire relationship.

They will also both like fairytale heroes and value the usual pride, chastity and bravery scenario. Still, the core of these values is different for the two of them. Aries representatives will value them because of that sense of strength, power and because of the role of that one and only hero, smarter and braver than everyone else. Pisces value them for their ideals, happy endings and those utopian relationships between those few worthy men and women.

ARIES & PISCES SHARED ACTIVITIES
They could share a walk in the forest, or engage in water sports. Other activities that Aries would gladly take on are not “spiritual” enough for Pisces. Pisces always need to have “a second perspective” and this can seem crazy to their Aries partner. Yes, Pisces partner knows that sports are healthy, but they need to attach them to something from their infinite world.

So water sports are fine, because of all the secrets of the water, the view of the ocean, being underwater and contemplating on the purpose of life, or a dive in the pool. Walk in the forest can be beautiful because they can hear the birds, trees saying “hello” and wait for two owls to rest on their shoulders. In the world of Aries, things are really so much simpler and if they want to enjoy something, they will simply go and enjoy. In the same manner, they would run when they run, practice when they practice and watch the ocean when they watch the ocean.

SUMMARY
This is a relationship disturbed mostly by the lack of trust and the ability of both parties to open up to their partner. Aries is ruled by Mars, the planet that rules our first chakra, responsible for our ability to set good boundaries. Pisces is ruled by Neptune, in charge of our entire aura and our permeability for outside stimuli. Since they are both responsible for our border with the outside world, it is hard to say which partner should loosen up and make it possible for them to come close. Their only chance of a happy ending is if Aries partner dives in and their Pisces partner wakes up.