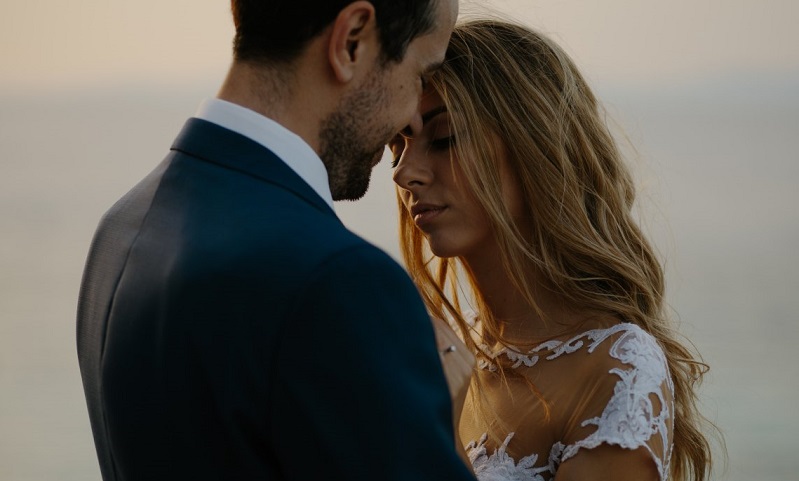 Because you’ve woken him up. You’ve shaken him out of his comfortable but incredibly monotonous routine, you’ve challenged him to grow, and you’ve reminded him how exciting life can be, not just in the big travel-the-world kind of moments, but in the everyday, simple moments too. With you he sees a life that will never be boring and a relationship in which the two of you will never stop exploring and learning together.

Because with you, he feels home. You’ve taught him the importance of loyalty, of family and friendship, and of spreading warmth. He’s never felt more safe than he does with you, because he knows you’re someone he can completely depend on and you’re someone who will always bring out the good in him.

Because you’ve breathed life into a way of living that had grown very stale, lonely, and uninteresting for him. Life before you was unexciting, and repetitive, and filled with zero risk. He did the same thing every day, he never went out on a limb to try something new, he became too okay with never pushing himself to new heights. He wants to marry you because you bring an energy and a liveliness to his existence that he hasn’t felt in a long time, and he knows a life with you would mean a life of consistent challenge, variety, and spirit.

Because you’ve reminded him (or taught him) how to be vulnerable. He tried to put on a tough and impenetrable exterior for so long, until you came in and melted his protective barriers with your warmth and openness. He knows a life with you means a life in which he learns to become more comfortable with himself and his own emotions, and he wants nothing more than to live that light, weightless, and happy existence with you.

Because you make him feel more encouraged, supported, and exhilarated than any other partner he’s ever had. You’ve reminded him of the importance of creativity and self-exploration, and you’ve reminded him that just because he might be settled on one particular career path doesn’t mean he has to ever stop learning. Your passion and enthusiasm for life inspires him every day, and he wants to be with you because he wants a partner who never lets him stop feeling excited about where he is and where he can go.

Because being with you makes him feel real, unaffected, and true to himself. The conversations he has with you both teach him and make him feel less alone, your presence brings him a sense of comfort and belonging, and your tendency to pay attention to all the little details in the world is something he’s never seen in anyone else. He knows that a life with you means a life that focuses on patience, authenticity, and true connection, and he wouldn’t want to live that with anyone else but you.

Because you’ve brought a sense of lightness and fun back into his life, while still making him feel accepted for who he is. He loves how welcoming, warm, and inclusive you are to everyone you meet, and how much joy you find from your relationships with others. You’ve reminded him how important it is to be a loyal and dependable friend, and he loves that a life with you would be a life in which together you prioritize family, friendship, and belonging.

Because he is inspired and in awe of your focus, your tenacity, and your drive for getting better at the things you care about and expanding your world view every day. He wants to spend the rest of his life with you because he knows that he would never grow complacent – because he’d be too inspired by the determined, curious, and resolute person that you are to ever settle for mediocrity in himself.

Because he loves how much you prioritize joy, happiness, self-care, and authenticity in your own life. He is so inspired by the fact that you’re both light and deep, honest and silly, a free spirit and a dependable person. He knows that marrying you would mean marrying a person who never stops finding joy in life’s everyday situations, and a person who prioritizes the importance of true connection and acceptance of others.

Because he loves that it feels like he discovers a new side of you every single day. He fell in love with your ambition, your confidence, and your determination. But every moment since then, he’s discovered another incredible thing about you – that you have a silly side, that you’re dedicated to doing the right thing, that you’re endlessly patient and understanding. He wants to be with you because he knows without a doubt that you will challenge him to be the best version of himself every single day of his life.

Because you’ve opened his eyes to the world outside of his comforting little bubble. Being with you has taught him so much – about keeping up with current events, about using his gifts and his privilege to help those less fortunate than him, and about caring about places and events and people that aren’t directly in his social circle. Before you came into his life, he was a lot more ignorant about things going on in the world and he let himself get distracted or bothered by insignificant little things that weren’t actually a big deal. But he knows that a life with you will lead him to be a much more vigilant and empathetic person who puts his energy into the stuff that truly matters.

Because you bring him a sense of peace, compassion, and humbleness that he’s never felt before at this level. Your sense of patience, your appreciation for the simple things, and your bottomless compassion for others makes him feel like he’s found a home within you. He loves that being with you has taught him the importance of empathy, sympathy, presence, and truly being grateful and joyful for the life that you’re currently living. /by Sophie Wrenfield